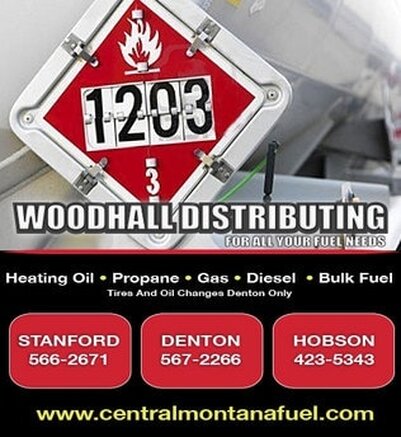 Denton is a small farming community north of Stanford along Montana State Highway 81.

Found in the heartland of the Judith Basin near Dry Wolf Creek, it is now one of the top dryland farm and cattle production communities in the state.

Denton is the turnaround point for the Charlie Russell Chew Choo, which is central Montana's dinner train.

Starting in Lewistown, The Charlie Russell Chew Choo is a unique, scenic train ride aboard 1950s vintage cars. Enjoy dramatic scenery riding through tunnels and over trestles while enjoying fine dining during this 3 ½-hour train ride.

Denton was named for two brothers named Dent, stock men who owned the land on which the original townsite was located.  "Dent" was considered too short a name for a town, so it was changed to Denton.

Harry Dent was appointed postmaster when the office opened in 1888. (from Cheney's Names on the Face of Montana, Mountain Press Publishing Company)

Notable residents include: Walter A. Coslet, science fiction fan and officer of the National Fantasy Fan Federation, lived here. Don Koehler, one of the few people on record to grow over eight feet tall. James A. Shelton, Navy ensign who received the Navy Cross posthumously for his service during the Battle of Midway.