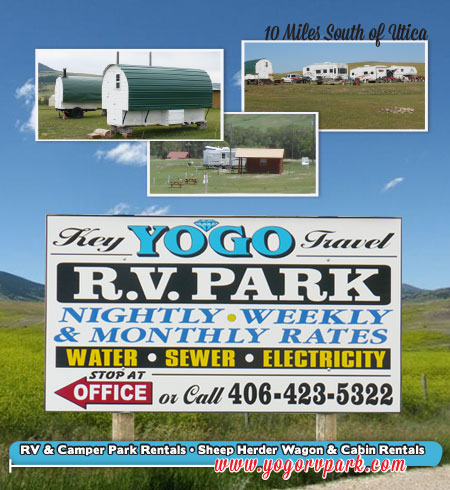 While the Royal American Sapphire is a part of the world of big business, high finance, national marketing and aggressive advertising, the same stone, in Central Montana, is and will always be known as the Yogo sapphire.  Its origin, the Yogo dike, and the country that surrounds it, is part of a different world, that of Jake Hoover, Charlie Russell and Charles Gadsden.

A visit here is a long step back in time.  Most visitors come from Lewistown, driving west on US Route 87 across the farm and ranch lands of the sprawling Judith River Basin.  They cross the Judith River, then turn off the highway at the tiny town of Hobson, named for Simeon S. Hobson, the rancher and, later, Montana state senator, who grubstaked a local hunter and prospector named Jake Hoover in his search for gold in the nearby Little Belt Mountains nearly a century ago.

From Hobson, an asphalt county road follows the Judith River to Utica, a little cow town that was painted into history by Charles M. Russell.  Nestled at the edge of the Judith River Basin and the Little Belts, Utica is a quiet place that time has somehow passed by.  The main street is still only two blocks long, just as it was when Russell painted his famed watercolor "A Quiet Day in Utica."  This is the same street where Hoover, Hobson, Russell and Mille Ringgold once walked and where the stagecoaches once rolled, stagecoaches that, many years ago, brought Englishmen in and took canvas bags of Yogo sapphires out.

A gravel road continues to the southwest along the Judith River, gradually climbing into the foothills.  Eleven miles from Utica and somewhat incongruous with the pleasant, open country, stands a cluster of mobile homes and campers on the slopes west of the river - Sapphire Village, where lot owners still hold the right in perpetuity to dig nearby for gemstones.  A half mile upstream as the confluence of the South Fork of the Judith, a place still known as Pig-Eye Basin.

A short distance downstream is another site of great relevance to the Yogo story, one devoid of activity and not marked by plaques or ruins.  It was here that the greatest precious gemstone discovery in North America was made.  In the whisper of the pines and the shadow of the towering limestone walls, Old Jake never found much gold, but he started America's greatest adventure in mining native precious gemstones when he filled a cigar box with those blue pebbles. Today, the mines are privately owned and closed to the public.  Excerpts and References from the book "Yogo The Great American Sapphire" written by Stephen M. Voynick in 1985.