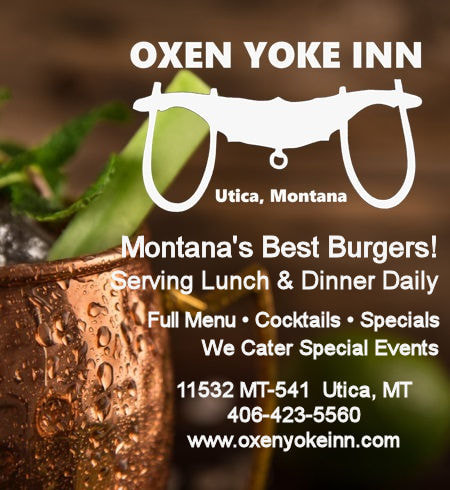 Utica, on the Judith River, was a hangout for cowboys and headquarters for the Judith Basin Cattle Pool in the early 1880s. There was a storehouse for saddles, bridles, and other gear for roundups from one season to the next.  When the riders came to town, Utica was the liveliest town around.

Jake Hoover discovered a sapphire mine in Yogo Gulch above Utica; that’s the same Hoover who gave Charlie Russell a home and some grub while the artist was fiddling around with painting. Four New York prospectors heard about Yogo Gulch and came rushing out. But there wasn’t enough money in the mining game for all four, so some settled on the land.

Utica is Charlie Russell country and much of the artist’s work bears memories of this area and its people. After spending a winter with Jake Hoover, Russell decided to establish a little place of his own, so he picked out a homestead in Pagel Gulch above Utica.

Utica was cattle country back in the early days and is getting back to it now. The town had a renewal of activity when the sapphire mines reopened, attracting tourists as well as summer homeowners. Today Utica stands as a relic to the past, a place where, more than any other in Montana, the romantic vision of the Old West still survives in cowboy sagas and tales. (from Cheney’s Names on the Face of Montana, Mountain Press Publishing Company).

Judith River is a tributary of the Missouri River. Starting in the Little Belt Mountains and stretching for 127 miles in central Montana and emptying into the Missouri River not far from Judith Landing. This excellent canoeing stream flows through isolated breaks country that features white cliffs, deep coulees, and peculiar rock formations, but floaters should be aware of fences crossing the channel. Captain Clark of the Corps of Discovery named the Judith for Julia Hancock, whom he later married in 1808.