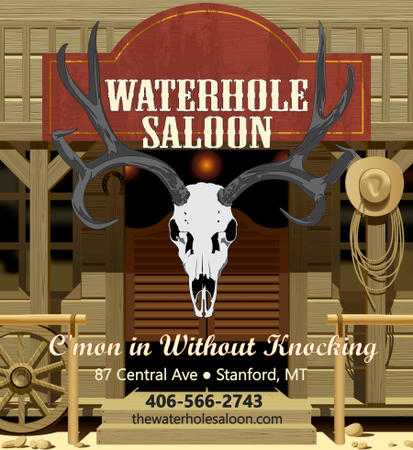 In 1880 Calvin and Edward Bower came here with a thousand head of sheep and acquired 100,000 acres. The Bowers named the settlement for their old home, Stanfordville, in Duchess County, New York.  Today, Stanford is the county seat.

Stanford was a station on the Fort Benton-Billings stage route and a meeting place for cowboys from the Judith Basin Pool and other cattle companies who stock grazed the rich Judith Basin before homesteaders and sheepmen arrived.

The Judith Basin County Museum was opened in 1967. The museum has many old time articles, old pictures and some history books. It also contains a collection of 2,082 sets of salt and pepper shakers; a collection of 50,000 buttons; an Indian artifacts display, and many more items.

For years stories of white wolves of prodigious strength and cunning grew and multiplied among folk living in the Judith. One particularly huge wolf known as Old Snowdrift became a legendary outlaw. (from Cheney’s Names on the Face of Montana, Mountain Press Publishing Company).
​
Between Stanford and the Little Belt mountains, ranged the Judith Basin area’s notorious White Wolf. There he reigned supreme for over fifteen years, preying on calves and eluding the cattlemen track him down. As his fame grew, hunters from all over the United States came to try their luck at hunting the legendary White Wolf. When the White Wolf was finally captured, locals found that he as large as had been reported, weighing 83 pounds and measuring, including the tail, six feet long.